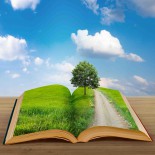 Desperate to text Tanner and Bryce, Seth stopped at Natalie’s door. Seth was the only kid he knew who had to share a cell phone with his sister. He knocked, expecting the typical snotty “Go away,” but to his surprise, the handle twisted, and the door swung inward.

He stabbed out his open palm. “I need the phone.”

Her scowl implied he’d demanded to see her diary, but after a moment, she retrieved the phone off her desk. Seth grabbed for it, but Natalie yanked it back.

“I heard what you said to Mom.” She motioned him in.

“Sure, from behind my closed door.”

Okay, it had gotten loud, and Seth should probably just be glad the neighbors hadn’t dragged chairs over to watch the fireworks through their JumboTron kitchen window. He stepped inside.

Natalie closed the door. “You know what babies do? They cry and whine at their moms.”

Seth’s temper shot straight back to broil. Who did she think she was? She didn’t live in his shoes! She was a stupid girl who’d erased Dad from her vocabulary years ago. She’d obviously “moved on,” as Bryce put it, but Seth couldn’t.

“You know what witches do? They stick their warty noses where they don’t belong. Mom’s hiding something! Sorry if you’re too busy toilet-papering the inside of the phone with selfies to give a crap what happened to Dad.” He stabbed for the device.

Again, Natalie yanked it back. “Seth, the MO of the criminally insane, and the totally clueless, is to repeat and repeat the same actions and hope for a different result.”

She gestured at the corner of her bed for Seth to sit. He didn’t budge. She shoved him. His knees buckled, and boom, he was sitting.

Wheeling her desk chair close and grabbing a seat, she tapped a spastic finger to her temple. “You’re getting nowhere, and you’re making yourself, and Mom, crazy. Just stop it!”

What was wrong with her? Stop asking about Dad? Did she have liquid nitrogen in her veins? The whole universe seemed to take pleasure in shoving his dad’s absence in his face. Tanner’s boat tango with Mr. A, Mr. Cady’s fundraiser, and just last Monday, Bryce’s nine-hour rant about building model rockets with his dad and driving up to Mansfield to launch them.

What was Seth’s latest bonding experience? Voicing two sides of a conversation while tossing a ball at his pitchback—pretending. And now, Natalie had the stones to sandblast him for searching for the truth?

“I want answers, Natalie! I’m sick and tired of an empty vacuum where Dad should be!”

That sent him nuclear. “No you don’t!”

“Nice ego, Seth. This’ll rock your doorknob-IQ world, but I get that boys have a special bond with their dads. But earth to Seth, so do girls. If you weren’t such an antisocial dweeb, you’d see the irony in bringing a substitute to the father-daughter dance. It’s like dashing through the snow! Oh what fun it is to watch all my girlfriends hanging off their dads’ arms!” She stomped to her bookshelf and practically ripped a sleeve out from between My Life in Pink & Green and Treize Raisons.

Marching back, she stabbed it at Seth. It was a photograph of her and her friends, each with an arm around her dad. Natalie’s arm spanned a larger gap and tucked in behind “Uncle” Jim, who wasn’t even their uncle. The smile on her face was her worst fake camera smile.

“Look at it! It doesn’t say lifelong bond, it says lifelong sentence.” She plucked it back, marched to her trash can, and threw it in.

A spotlight came on in Seth’s head—awkward. Maybe he’d been a teeny tiny bit uh…shortsighted. Maybe Natalie did understand—a little. But still!

“So you abandoned the search because it’s painful? Geez, Natalie. You’d be a real role model, if I was a quitter. Are you saying I should give up? Like you?”

“I didn’t give up, Seth. But Mom’s feelings matter to me, unlike some people. This stuff tears her up like ticker tape in a tornado. I’m looking for answers just like you. The difference is, I have the decency to keep Mom out of it.”

Dang. That was harsh.

“That’s where you’re wrong, Natalie! I decided, not five minutes ago, to investigate but to leave Mom out of it.”

“About time! God. Boys’ maturity is like molasses. It’s super slow and leaves a mess behind.

Their mom tapped on the door. “Natalie?”

“Um, just a second.” Natalie’s eyes darted toward the door and then at Seth.

Without a word, he shook a no-no-no finger in the air. He was not ready to see his mom.

“It’s okay, honey. Listen, I got called into work. Dinner’s in the oven. Can you please look after yourself and see that Seth gets something to eat?”

“When you see him, would you please be nice to him?” Her voice was soft and a little shaky. “He’s really struggling right now.”

This entry was posted on January 7, 2015 by delaneyabrams and tagged adventure, blogging101, fiction, middle grade, writing.